It could have been a great match. The 1970 Milwaukee Brewers had a serious lack of lineup power. The Washington Senators, led by manager Ted Williams, sought to trade either Frank Howard or newcomer Mike Epstein for a big return.

Frank Howard to the Brewers? It certainly was talked about in 1970, but ultimately a deal didn’t come to fruition. 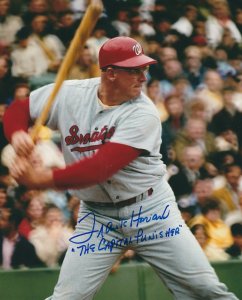 The Pride of Green Bay

Washington initially started hinting at trading Howard in the 1969-70 offseason. Howard was coming off a great season – .296 batting average, 48 home runs, 111 runs batted in and 102 walks. He split time between first base and outfield in 1969, but expected to be back in the outfield full time in 1970 with Epstein taking over first base – provided neither were traded before Opening Day.

In the meantime, Howard didn’t seem concerned about the trade rumors and felt he and Senators owner Robert Short had a “mutual admiration” society. Howard kept himself busy while he waited for spring training by speaking at banquets, such as the Nicolet Paper Co.’s gathering for teams it sponsored in various youth and recreation leagues. In previous off seasons he worked for Green Bay Packaging, but declined to do that in 1969-70 due to other commitments.

Opening Day came and went with both Epstein and Howard on Washington’s roster. Howard was approaching 300 career home runs but was still viewed as trade bait. July rolled around and trade rumors began to heat up regarding the soon to be 34-year-old slugger. Like Milwaukee, Washington was going nowhere in the standings and eventually would finish 70-92 for the season. The Senators were getting ready to wheel and deal.

The Brewers and Senators had already made one trade in May when Milwaukee sent outfielder Wayne Comer in exchange for outfielder Hank Allen and infielder Ron Theobald. Brewers General Manager Marvin Milkes had also made trades with Washington before the Seattle Pilots. The stage was set for something BIG – probably involving Howard.

Lou Chapman of the Milwaukee Sentinel broke a possible Howard trade to the Brewers on July 18. The timing couldn’t have been better to stir things up as the Brewers would be in Washington the next day to start a brief two game series.

Senators owner Robert Short said his club and the Brewers would be making a major deal at the end of the season “that will put the Brewers in a contending position.” Anyone on the Senators was available for a trade, according to Short. “I’ve talked to Howard about this and he knows my feelings,” Short said. As for Milkes, he acknowledged the franchises had been talking trades but was noncommittal.

While the initial rumors made the rounds, Milwaukee dropped both games to Washington, 4-3 and 2-0. Howard scored a run in the first game and was responsible for both runs in the second game. He hit a two-run home run off Brewers starter Al Downing. It was Howard’s 25th homer of the season and ruined a stellar performance by Downing, who allowed only two hits on the night. 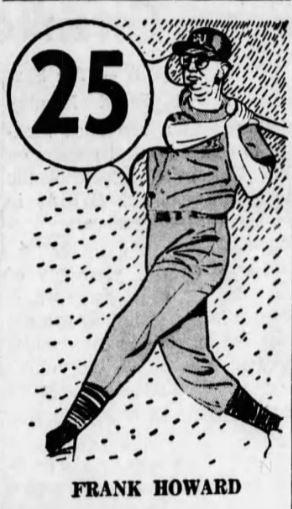 Hit your 25th homer, get your illustrated “likeness” in the paper

The Brewers/Senators big deal still hadn’t happened two months into the offseason. Baseball’s winter meetings kicked off in early December in Los Angeles, and while rumors still circulated, nothing materialized. The Boston Red Sox offered a sum of money for Brewers star Tommy Harper, which Milkes rejected. “I don’t see any value in receiving dollars without any players,” he said.

Harper led the 126-homer Brewers with 31 round-trippers in 1970. Adding the 6-foot-7 and 265-pound Frank Howard without losing Harper would go a long way toward bolstering the missing power in Milwaukee’s lineup. But it was not meant to be. Unfortunately talks with Washington broke down over the inclusion of Brewers top starting pitcher Marty Pattin in the deal.

“I want a million dollars for Howard, or the equivalent in players,” Short said. “Let’s start with Marty Pattin and Danny Walton,” he added.

The Brewers had expressed a willingness to part with Walton on previous occasions. Pitching, however, was like gold to Milkes. He commented, “One thing we can’t give up at this time and that’s pitching. So we’ll have to settle for what I call patchwork deals.”

Milkes said the Brewers were not quite ready to make major deals as their farm system needed time to develop. Being a two-year-old expansion club had its drawbacks.

Hondo and the Brew Crew

Washington held onto Howard for one more season, and though his offensive numbers declined (26 homers, 83 runs batted in) he still would have been welcomed in Milwaukee’s punch less lineup. He had stints in Texas and Detroit after that, but played a lot less and retired in 1973.

Howard went into coaching after his playing days were over and did make it to Milwaukee after all, from 1977-80. He managed Spokane of the Pacific Coast League before the Brewers and manager Alex Grammas promoted him to the big league staff in late 1976.

After Grammas was fired in the late 1977 front office housecleaning, “Hondo” expressed an interest in managing the Brewers. That position went to George Bamberger, and Howard remained with Milwaukee until getting a chance to manage in the big leagues with San Diego in 1981. In 1983, Bamberger resigned after managing 46 games for the New York Mets and Howard took over, but he wasn’t retained after the season.

Brewers fans loved seeing Hondo hit towering pop ups before games when he was coaching. We can only imagine him wearing the Brewers uniform as a player and hitting towering home runs at County Stadium.