The 1972 Milwaukee Brewers offense had a rough go of it all season, which was a big reason why the team finished in 6th place at 65-91 in the AL East. Catcher Ellie Rodriguez led the team in batting average with .288, but he wasn’t even quite an everyday player, as he had 355 at bats. First baseman George “Boomer” Scott, shortstop Rick Auerbach, and center fielder Dave May were the only players to reach the coveted 500 at bats mark.

Scott and left fielder John Briggs combined for 41 homers, but beyond that it was hard to find any offensive punch. The team finished with a .235 batting average in 5124 at bats. For comparison, the 2018 playoff team batted .252 in 6210 at bats – and that includes 260 at bats by pitchers.

The team spent a lot of April and early May mired in a severe hitting slump. After winning 5-1 on opening day in Cleveland, they didn’t score 5 runs in a game again until Sunday, May 7 – the day after they played the shortest nine inning game in team history. After ending April with a 3-7 record, they played just one game at home against Minnesota due to weather postponements – and were trounced 7-0.

The Brewers headed out to Anaheim for a three-game weekend series with the California Angels. Things only got worse, as they were shut out on Friday night 4-0. No one with a bat had an answer for Nolan Ryan, who easily tossed a three-hit complete game with a whopping 14 strikeouts. By then Briggs led the starters with a .190 batting average. Surely, there was nowhere to go but up, right?

Andy Messersmith took the hill for the Angels on Saturday night, and he had struggled in his previous two starts, giving up a combined 13 walks. He also had been dealing with a recently discovered case of tendonitis, but it wouldn’t bother him against the Brewers. Messersmith went the distance and allowed two hits – both singles by Auerbach – and struck out seven batters and didn’t give up any walks. He even struck out the side in the first inning (May, Ron Theobald, and Scott), and the Angels won 2-0.

“It has to be the best game I ever pitched in my life,” Messersmith said. “I only faced two batters over the minimum and I didn’t walk anyone.”

Messersmith retired 17 hitters in a row between Auerbach’s hits in the third and ninth inning. Auerbach’s hits were a one-bounce single past shortstop Leo Cardenas and a solid line drive to right field.

The 26-year-old righty didn’t need much help from his Angels teammates, which was good because they struggled against 1967 Cy Young Award winner Jim Lonborg, making his first start of the season. Lonborg allowed only five hits and one walk, but one of those hits was a solo homer by Vada Pinson over the 366-foot mark in right field.

Pinson scored the other Angels run in the fourth when he reached on an error, and scored on consecutive singles by Andy Cosco and Jim Spencer. Cardenas then walked to load the bases, but Lonborg got two key outs to end the threat.

Beyond that inning, the only thing that slowed down the action was Angels manager Del Rice getting tossed out of the game in the eighth inning. Ken Berry was hit by a pitch and Pinson followed by grounding what looked to be a clean single to right field. Umpires ruled the ball touched Berry and he was out, but Rice disagreed, saying the ball was not deflected.

“How could the ball hit someone in skin-tight trousers and it not be deflected?” Rice said. “Anyway, you can get a good view of the game from the dugout runway.”

Rice didn’t have to stand in the runway very long. After one hour and 31 minutes, he and the 19,440 fans in Anaheim Stadium were headed home. It was the shortest game in both Angels and Brewers history, and that helped a few players get off to an early start for a night on the town. 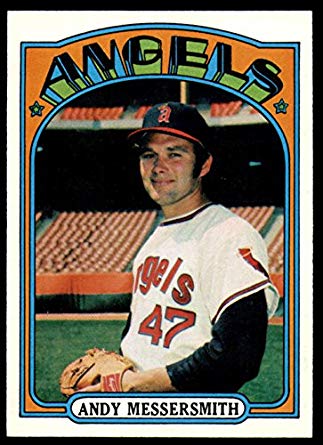 Breaking up a Streak

The Brewers finally broke up their 30-inning scoreless streak on Sunday behind the hitting of right fielder Billy Conigliaro and his new shoes. He had a two-run homer in the fifth inning off loser Ron Clark, and doubled in two more runs in the ninth inning to provide some cushion in a 5-2 win.

Conigliario revealed that he had an epiphany about his footwear as he headed out to the field before the game. “These shoes aren’t doing me any good,” he said to himself. “I’m going to change.”

***If the name Andy Messersmith sounds familiar to Brewers fans, it’s because he was the winning pitcher in the 12-0 Angels rout of Milwaukee on the Brewers first opening day in 1970. You can read about that game here.