Bob Busser started taking ballpark photographs with a brownie camera at Dodger stadium in 1967. He’s visited close to 800 venues over the years and has captured a staggering 75,000 images. Some of the stadiums have since been demolished, such as Comiskey Park, Tiger Stadium, Candlestick Park, and Milwaukee County Stadium.

If you missed it, I encourage you to visit my post about how Bob started photographing ballparks. He also shared memories and photos of Milwaukee County Stadium.

This time around, Bob was kind enough to offer some insight to his times photographing the Brewers current spring training facility at Maryvale, and their former home in Compadre.

Bob first started taking photographs of spring training ballparks in the mid-1980’s. He’d travel to Arizona from his house in southern California and spend a few days watching baseball.

There are a lot of advantages to photographing a spring training ballpark, mainly due to the smaller size. Busser said, “Most have berms in the outfield, so you could get a panoramic shot of home plate and the grandstands. And not as many people. In spring training, you could go most anywhere in a park to shoot.”

So, let’s start at Compadre… 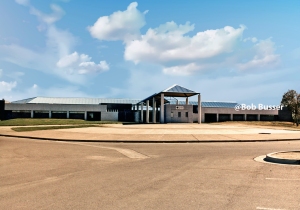 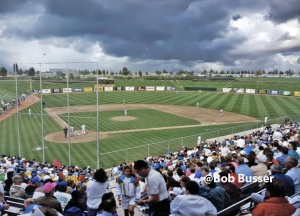 In April, 1985, the Brewers signed a ten-year lease with the city of Chandler. They moved their training operations from Sun City in time for the 1986 season. While Bob says he unfortunately didn’t get to visit Sun City, he’s grateful for being able to spend some time at Compadre. He made his first visit to the facility in 1988 and returned in 1991.

He said, “I liked that it was fairly easy to get to, right on Alma School Rd. Mind you, when it opened, there was not much in Chandler. Had they built it say in 1999 instead, the Brewers may still be there.   It was small, and offered really great views of the game.”

After twelve seasons, the Brewers moved west to Maryvale. Compadre was left abandoned. 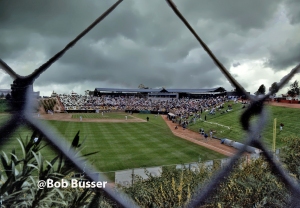 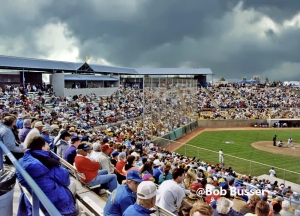 A Decade of Decay

Twelve seasons of use by the Brewers at Compadre were followed by years of disrepair. The city of Chandler did repurpose some of the practice fields for a local park, but the main stadium sat empty.

I asked Bob for how he felt about Compadre when he returned. He said, “Like I do for any venue that’s abandoned, it’s sad. After the Brewers left, I went back four times to shoot the park and its decay. The last time was in 2008 and it was really bad. Graffiti, weeds, decay…it was time for it to go. After it was finally torn down (in 2014), a new housing development was built on the site.” 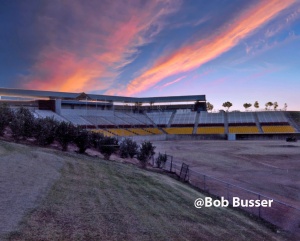 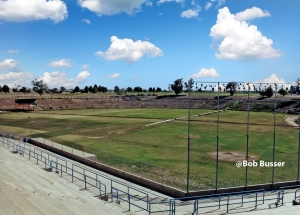 Bob feels that Maryvale was a big improvement in many ways, starting with location. It put the Brewers in the heart of all the other spring training sites, while Compadre was twenty miles away and to the south.

Busser added, “The site lines are much better to me anyway, in Maryvale. Seating is more, and they have a berm. It’s a much newer facility too. For me, a ballpark for spring training should be easy to get to, have good food choices, places for autographs, and a more intimate feel than a major league park.”

A lot of the talk in recent years has centered around the Brewers moving sites or partnering up with another team. Busser, for one, had hope the team could expand the facility and keep using the ballpark. To many fans delight, the team has agreed to partner with the city of Phoenix to spend money on improvements – and stay for the next 25 years!

Thankfully this means Bob will not have to photograph an abandoned facility in Maryvale, unlike what he shot in Compadre. 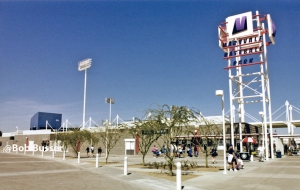 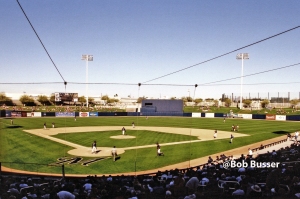 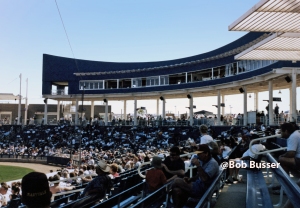 Bob is a professional photographer with work on display at the Baseball Hall of Fame in Cooperstown, NY. He has logged countless miles in an over 40-year career, capturing images of both old and new stadiums and arenas. You can see Bob’s photographs on www.ballparks.smugmug.com

Check out Bob’s photos of Chandler here and Maryvale here.

Bob started a Facebook group called Ballparks, Stadiums and Arenas of the past and present and you can also find him on Twitter: @BobBusser

You can also read about Bob’s visits to Tiger Stadium in Detroit on the 80’s Baseball site here.

Bob has a photo in my book Building the Brewers: Bud Selig and the Return of Major League Baseball to Milwaukee. It’s available to be ordered on the McFarland website.

3 thoughts on “Compadre and Maryvale – Interview with Photographer Bob Busser”