Respected. Compassionate. Caring. These are just a few of the words being used to describe former infielder and longtime coach Rob Picciolo. He passed away on Wednesday at age 64 due to a heart attack. Milwaukee Brewers fans remember him as a member of the 1982 team that made it to the World Series. But what may not be as widely remembered is the graceful way Picciolo handled his role backing up an infield (mainly Robin Yount) that was already set in stone. Before we get to that, let’s look at what brought Picciolo to the Brewers in the first place.

Picciolo was born on February 4, 1953, in Santa Monica, CA, and attended college there. Teams kept trying to draft him, but he would not sign. The San Francisco Giants and Kansas City Royals took a crack in 1973, and the Detroit Tigers thought they had a shot in 1974, but it wasn’t until 1975 that Picciolo signed with Oakland after being selected in the first round of the draft. He spent the next two seasons working his way up through Oakland’s minor league system. Picciolo arrived in the bigs in 1977 and appeared in 148 games for the A’s (121 starts). He had just one more 100+ game season in his nine-year career, playing primarily as a backup.

Oakland traded Picciolo to Milwaukee on May 14, 1982. The A’s were going nowhere that season, so the trade was an opportunity to pick up prospects in utilityman Johnny Evans and pitcher Mike Warren. The Brewers were also going nowhere under manager Buck Rodgers, who was a little over two weeks away from being dismissed and replaced with Harvey Kuenn. With the acquisition of Picciolo, they added experience and a guy who could play all over the infield.

General Manager Harry Dalton said, “We liked the chemistry of that deal. We got someone we wanted for two players that really didn’t fit into our plans. But he’s (Picciolo) a utility infielder. You’re not going to get a blue-chip pitcher for what you give up for a utility infielder.”

Later in the summer Dalton did get his blue-chip pitcher when he traded with Houston for Don Sutton. He also bought pitcher Doc Medich from Texas, completing a trifecta of veteran acquisitions. The Brew Crew was ready for a playoff push.

It took nearly two weeks for Picciolo to appear in a game after the trade. He replaced Jim Gantner at second base in a game where his former Oakland teammates were beating up on the Brewers. It was the seventh inning of a 7-2 loss. Picciolo lined out in a pinch hitting appearance and played the final two innings in the field. Two days later he started in a game against the California Angels and picked up a base hit before being driven home by Robin Yount. Gantner took his spot an inning later and the Brewers went on to lose 6-5, which was their 12th loss in 17 games.

It can be argued that if the Brewers had not righted their ship under Kuenn in June, Picciolo might have seen more action. As the regulars started clicking and chasing a pennant, Picciolo saw less time in the lineup. He’d occasionally find himself penciled in for the second game of a doubleheader. But he was technically backing up Eddie Romero – a backup infielder himself. When the Brewers made it to the World Series that October, Picciolo provided comments about Yount and what it was like to play behind the man who compiled a MVP season.

Picciolo said, “People think it’s hard playing behind him, but it’s really not. It would be a lot harder playing behind someone who wasn’t as talented or wasn’t as devoted. I wouldn’t say I’m in awe of Robin. I just totally respect the man.”

That’s some great commentary from a guy who didn’t get to play a minute in the 1982 playoffs or World Series.

Picciolo only appeared in 14 games for the Brewers in 1983 and was granted free agency after the season ended. If you look at Baseball Reference, there isn’t a lot to see for his time in Milwaukee: 36 games in two seasons with 52 plate appearances, and a .250 batting average with two runs batted in. But the Brewers did play him 1B, 2B, SS, 3B, and DH, plus his attitude playing behind Yount speaks volumes to how he carried himself. 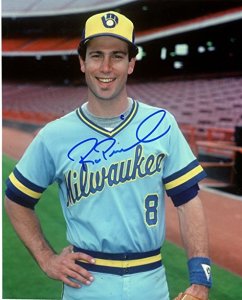 2 thoughts on “Remembering Rob Picciolo with the Milwaukee Brewers”