The Milwaukee Brewers played in the American League East division from 1972-93. In 2017, the Brewers will play many of their old foes from the East in Interleague matchups.  Baltimore, Boston, Toronto, and the New York Yankees are all on the schedule this season.  To celebrate the glory days of the old AL East, I’ve created a “classic opponents” series of blog posts.  I’ll be covering great games, opposing teams, and even individual players from the East, particularly from Milwaukee’s golden baseball era of 1978-82.

Boston was a formidable opponent of those classic Brewers teams, with an impressive roster of their own.  Both teams had some memorable battles, including a couple of games in 1980 where the Brewers exploded for a truckload of runs.

We look like a calm bunch, but look out Milwaukee…we know how to hit! (click on all images on this page to enlarge)

Both Boston and Milwaukee were chasing New York when they met at Fenway Park on the afternoon of Saturday, May 31, 1980.  The Yankees had an impressive 27-16 record with Milwaukee and Toronto in second place at 22-20, 4.5 games back.  Boston was just behind with a 22-22 mark.

The series kicked off on Friday night with a 5-3 Red Sox win.  Boston scored five runs in four innings to chase starter Lary Sorensen.  The Brewers scored all three of their runs in the last two innings, and had an opportunity to score more, but fell short.

Boston sent their standard brutal lineup out on Saturday afternoon behind starter Mike Torrez.  After two pretty consistent seasons, the big righty was having a rough go of it.  Torrez was 1-4 when he took the hill, and ended the season with a 9-16 mark and 5.08 earned run average.

Milwaukee countered with lefty ace Mike Caldwell and the hitting machine better known as “Bambi’s Bombers”.  But Manager George Bamberger wasn’t there – he was recovering from a heart attack suffered during spring training.  Doctors performed quintuple bypass surgery at Mount Sinai Medical Center, and Bamberger did return to manage on June 6 as planned.  In the meantime it was up to Coach Buck Rodgers to run the team. 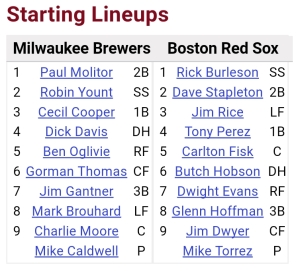 Going from a Brief Pitcher’s Duel to Batting Around

After a Paul Molitor single to lead off the game, Mike Torrez shut down the Crew.  Rick Burleson tagged Mike Caldwell for a homer to lead off the bottom half of the inning – the first of FIVE dingers the Sox would hit that day.  But that was all the scoring either team would do until the top of the third inning when the Brewers went ballistic.

It all started with left fielder Mark Brouhard’s single.  The Brewers batted through the lineup and scored eight runs on two walks and seven hits – and none of those hits were homers.  Brouhard, Molitor, and Charlie Moore had two trips to the plate that inning, but they only faced Mike Torrez once.  He recorded just one out and was credited with giving up five runs.  Keith MacWhorter relieved Torrez and surrendered the remaining runs, but came back and pitched a scoreless fourth inning.

Paul Molitor said later, “Everyone was anxious to get up to the plate.”

Mike Caldwell looked settled in with a huge 8-1 lead when he faced the middle of Boston’s lineup in the bottom of the fourth.  A Dave Stapleton homer to lead off was nothing to be too concerned about, especially after Caldwell got the dangerous Jim Rice to ground out.

Up next was Tony Perez.  Bam!  A homer!  Carlton Fisk…another homer!  Butch Hobson came to the plate, and you guessed it…yet another homer.  Caldwell hit the showers and Reggie Cleveland got out of the inning with no further damage.  Milwaukee’s big lead was cut to 8-5 with half a ballgame left.

Dick Drago and Reggie Cleveland both pitched a clean fifth inning.  Robin Yount hit a solo homer off Drago in the sixth.  Boston picked up two runs in the bottom of the inning when Perez, Fisk, and Hobson had consecutive hits.  The score tightened to 9-7, and with two potent lineups, it was anyone’s guess what might happen before the game’s final out.

Dick Drago ran out of gas facing the Brewers in the top of the seventh.  Dick Davis led off with a single and would later make the final out in the inning.  In between, a Ben Oglivie double and Jim Gantner single forced Boston manager Don Zimmer to go back to his bullpen.

Former Brewer Skip Lockwood was greeted by a Mark Brouhard single, Charlie Moore double, and Paul Molitor homer.  Lockwood retired the next three hitters, but the damage was done and Milwaukee pulled away to a 15-7 lead.

Cecil Cooper said, “When we score a lot of runs we just keep it up and pour it on.”

The Brewers weren’t done pouring it on just yet.

Coop batted .352 in 1980 and won the first of three consecutive Silver Slugger awards

Locked in on Lockwood

It was a quick 1-2-3 bottom half of the seventh for Reggie Cleveland.  Unfortunately for Skip Lockwood, he didn’t have the same fortune facing the Brewers in the top of the eighth.  Lockwood eventually recorded three outs, but not before facing eight batters and giving up four runs on five hits.  Milwaukee was cruising 19-7.

Reggie Cleveland got into trouble in the bottom of the inning and had allowed two men to get on base with two outs.  Lefty late inning stopper Bob McClure came on and got Glenn Hoffman to ground out to end the game.

It’s possible the Brewers were tired from all the hitting and running the bases at that point.  They went quietly in the ninth.  Boston scored one more time on a second homer by Dave Stapleton off Bob McClure.  The final was 19-8 in favor of Milwaukee.

Buck Rodgers commented, “The score is not always indicative of the kind of ballgame.  It’s always nice to score runs, but don’t forget it was a two run ballgame (9-7) going into the seventh.” 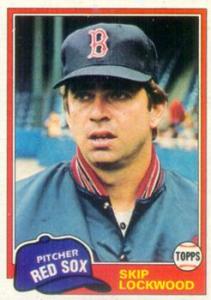 Wow…Milwaukee mostly stunk back when I was with the team!

Every Milwaukee starter had at least one hit that day.  Cecil Cooper, Dick Davis, Mark Brouhard, and Charlie Moore had two apiece.  Each Milwaukee starter with the exception of Brouhard had an RBI in the game as well.

Milwaukee set two franchise single game records that day on offense. The 19 runs eclipsed a record set earlier in the year when they unloaded on the Red Sox in an 18-1 win.  A great recap of that game is called “Brewer Bombers” and can be found here on the 80’s Baseball site.  The Brewers 22 hits toppled the old mark of 21 hits set on July 23, 1978, against the Texas Rangers in Arlington.

“On a day like today, everybody gets relaxed,” said Jim Gantner.  “It’s fun to come out here.  Everything we hit fell in.”

Rodgers was right.  The next day Boston again scored 8 runs, and this time held on to win 8-5.  In July, Boston trounced Milwaukee 7-0 in the second game of a doubleheader.

When all was said and done the two teams had even results in 1980, with Milwaukee winning 7 games and Boston 6 in their 13 contests.  But at the end of the season it was the New York Yankees – not Boston or Milwaukee – that would claim the American League East division.  The Yankees finished with an impressive 103-59 mark, followed by the 100-win Baltimore Orioles.  Milwaukee landed in a distant third place at 86-76 with Boston just a bit back at 83-77.

No matter their records, Milwaukee vs. Boston made for some great games in 1980!

Pepsi doesn’t seem appropriate for this cast of characters