This past Sunday I attended the Milwaukee Brewers Annual Winter Fan Fest, more commonly known as Brewers On Deck. Here’s a recap of the event and a bit of my personal perspective, with a few photos to boot.

I picked up a good friend shortly after 8:00 a.m. and we made the 1.5-hour trek to Milwaukee’s “Wisconsin Center” where the event was held for the umpteenth year in a row – but for good reason. The room is huge enough to accommodate tons of fans and everything the team brings in to make the day special.

We arrived just before 10:00 a.m. and got into the event shortly after the doors opened. The Brewers had promised a number of highlights similar to prior years, such as autographs, photo opportunities, shopping, games, kids clinics, Q&A’s, and game shows. We got our bearings, checked the event schedule, and decided to hit the Brewers Community Foundation sale.

The sale is like a rummage area of team items. In past years it was a free-for-all and almost impossible to get close to any items without a wrecking ball to move people out of the way. As we haven’t attended On Deck in a few years, I’m not sure when the sale area became more controlled (i.e. about five at a time were let in to shop). It was nice to shop in controlled chaos rather than a slugfest. We both picked up pretty cool Brewers jackets for a decent price, and I snagged a DVD recap of the 2011 playoff season that I didn’t know existed.

We wandered for a bit and kind of checked out the various areas, and then wound up in the vendor shopping area, which is a sports collector’s dream come true. It was one long row of vendors back-to-back (two sided) with everything from pennants of the Chicago Cubs 1984 NLDS Championship/World Series (now THAT was obviously printed early) to bobbleheads. Of course the bobbles always get my full attention, and I about fell over when I found one of the 2006 Robin Yount bobbles I have been looking to pick up – until the guy told me he had ALL THREE versions the Brewers gave away. Here’s the team’s 2006 press release:

“Brewers Hall of Famer and current Bench Coach Robin Yount will be the featured bobblehead giveaway. Fans will receive one of three versions of the Yount bobble: his 1974 Rookie Brewers home uniform, his 1982 Brewers powder blue uniform and his current Brewers home white uniform.”

Um, hello?!!! Yeah, that was a no-brainer purchase for me, especially when I found out the vendor’s price was better than anything I’ve seen online. Score! Normally the team just does an alternate version of the bobblehead in a different uniform for giveaways, but the Yount ones are unique since each is from a different era in his career.

That was actually the last thing (other than lunch) that either of us purchased for the day. We spent time bouncing in and out of the free photo area, remembering back to the year when we easily got photos with a young Jonathan Lucroy, before he became a star player. We also managed to get a few autographs in the free “bonus area” from some up-and-coming players.  Lines were long for any alumni or current player autographs, so we stuck to the lines that moved quickly.

Lunch was…well, a long wait and it was what it was. About 15 bucks for a burger, fries, and drink.  Certainly not ballpark food by any means, but it served the purpose and got us off our feet for a bit.

After lunch we hit what we like to call the “State of the Union Address” which is a Q&A with management. This year the guests were owner Mark Attanasio, Assistant General Manager Matt Arnold, and Manager Craig Counsell.  Questions from the audience mainly focused on player acquisition, development, and who plays where.  After the obligatory “Are ya gonna move Ryan Braun to first base ever?” question (because inquiring minds want to know), Counsell talked about exploring all options for players – and that he had discussions with second baseman Scooter Gennett about playing the corners in both the infield and outfield this season.

Attanasio touched on the possibility of purchasing the Class A Carolina Mudcats in an effort to solidify young player development. Apparently negotiations are beginning to heat up.  But the one thing that really stuck out for me in the session came when Counsell told “anyone visiting spring training” to check out the Brewers minor league complex.  He talked about what it’s like to see 180 players that are the best from their towns all competing – and most not ever making it to the majors.  Counsell said it puts everything in perspective, especially for players on the big league roster.

After the Q&A we again circled the floor a bit and were able to get more photos with players. There was a cool “Brewers Museum” area that we hit twice during the day.  It was great to see items from many different eras, such as Carlos Gomez’s Gold Glove award, original seats and a turnstile from County Stadium, reprints of newspaper articles, baseballs and a photo of the five players that hit consecutive homers in an inning to tie the major league record, and even a Seattle Pilots pennant.

As the day wound down we took a break and watched the Brewers version of TV’s Match Game, called “Milwaukee Match”. The panel consisted of Bob Uecker, Ryan Braun, Kirk Niewenhuis, coaches Pat Murphy and Ed Sedar, and longtime Brewers major/minor league pitcher turned social media star Tim Dillard.  The game was hosted by radio announcer Jeff Levering and gave contestants the opportunity to win some team-related items such as tickets and gift cards.  Of course the game was a riot, and we left thinking it might be good to start grooming Dillard for a spot in the radio booth alongside Uecker.

Our final stops were to get photos with two players and then take one last look at the museum area. By the end of the day our list of photo ops included Zach Davies, Hernan Perez, Jimmy Nelson, Andrew Susac, Jett Bandy, and Carlos Torres – just to name a few.

It was a fun and energizing day that always helps bridge the last gap between winter and spring training. I figure there are far worse ways to spend the $15 admission fee!

Eric Thames in the game area 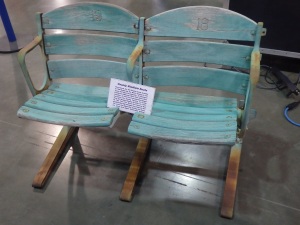 Yours truly meeting Taylor Jungmann. My friend told us rather than saying “cheese” we should say ‘STRIKEOUTS!”