On this date in Milwaukee Brewers history, the infamous “Chuckie hacks” incident happened in Anaheim. This bit of baseball wackiness all played out on May 16, 1997, during a 5-1 Brewers loss to pitcher Chuck Finley and the Angels.

“Excuse me while I take my first step toward the Hall of Fame.” – Willie Mays Hayes, Major League

Anyone looking for a real life version of the fictional Hayes could look toward 22 year-old outfielder Chuck Carr. He was originally drafted by the Cincinnati Reds in 1986 and profiled as a hit for average guy, little power, but a stolen base threat.  He didn’t last in the Reds system long, however, and was released the following April.  The Seattle Mariners signed him, and by 1988 he made it to their AA team in Vermont, where he crossed paths with another young outfielder named Ken Griffey Jr.  He told Griffey he’d better go find another position to play because Chuck Carr was going to be the team’s new center fielder.

Years later Griffey was asked if he remembered Carr.  He said, “Chuck ‘All World’ Carr?  Chuck ‘Am I A Superstar? Just Ask Me’ Carr.  Is he still wearing those blue contacts?  That day he started, afterward he said ‘See?’  The next day, I was back in center.”

The Mariners traded Carr to the New York Mets after the 1988 season for a minor league pitcher.  He finally made it to the majors with the Mets in late August, 1990, as a replacement for the injured Mark Carreon.  The Associated Press reported that “Carr is a switch-hitter, a speedster, but hardly the Mets’ savior.”

The Mets finished 91-71 that year, and Carr saw action in just four games, with two plate appearances – hardly savior material as predicted. Trouble was, Carr seemed to think himself a savior of every team he played for.  The next season he managed to get into 12 games with the Mets, and they traded him after the season to the St. Louis Cardinals for a minor league pitcher.  He spent most of the year in the minors, but the Cardinals gave him some opportunities late in the year.  When Carr joined the team he wanted to wear No. 1 on his jersey, but was informed that was Ozzie Smith’s number. Carr replied, “In with the new and out with the old.”

Carr hit just .219 in 76 at bats and found himself in the expansion draft that fall.  The Florida Marlins picked him in the 14th round.

Carr appeared to be the frontrunner to be the Opening Day starter for the Marlins in 1993, but the job went to Scott Pose. When Pose was sent down to the minors 16 days later, Carr finally had his shot at stardom.  But in the interim, Carr did his best Willie Mays Hayes impression, saying, “Someday when I’m in the Hall of Fame I’ll look back on this and laugh.”

When Carr did get in the lineup on an everyday basis, it quickly became obvious that he played at two extremes – either spectacular or frustrating. There seemed to be no middle ground with Chuck Carr.  Reporters covering the Marlins found his “style over substance” manner of play to be great fodder for articles.  A case in point is an article by Gordon Edes of the South Florida Sun Sentinel on May 7, 1993.

Edes wrote, “Carr would have been the Opening Day center fielder if he hadn’t been afflicted with an extreme case of terminal overconfidence. It’s almost as if Carr didn’t realize that four teams – the Reds, Mariners, Mets, and Cardinals – hadn’t given up on him before his 25th birthday.”

Opposing players couldn’t help but notice Carr’s swagger that season. Carr got upset when Mets pitcher Bret Saberhagen threw inside on him, and he yelled to Saberhagen that he had better control than what he had just showed.  Saberhagen replied, “You’re right, I do.  If I wanted to hit you, I would have.”

After the game, Saberhagen said, “He’s a little hot doggish. He’s like a Rickey Henderson-type guy.  He likes to showboat out there.”

The “hot doggish” Carr went on to have his best season in the bigs.  He stole 58 bases to lead the National League while hitting .267 with 41 runs batted in.  Hardly Hall of Fame numbers, but it seemed as though Chuck Carr was heading in the right direction.

In early 1994, Carr sponsored a youth baseball team that decided to call itself Chuck Carr’s Florida Marlins.  After Carr found out the team name, he responded “Yabba dabba doo.”

The 1994-95 seasons turned out to be more along the lines of “Yabba dabba don’t” for Carr.  He still managed to steal 32 bases in 1994 despite having about 150 less plate appearances than the year before.  Yet for all the stolen bases, Carr also occasionally got himself into trouble on the base paths. He managed to get himself thrown out in three rundowns – in one game!  Carr shrugged it off, saying, “I had a good day AND a bad day.”

In 1995 he spent time on the disabled list in May for a pulled hamstring, and never got on track after that.  By early August, manager Rene Lachemann had a closed door meeting with Carr, telling him he planned to take a look at Jesus Tavarez in center field.  Carr headed to the bench and finished the year with a .227 batting average in 365 plate appearances.  Meanwhile, Tavarez hit .289, making Carr expendable.

On December 4, 1995, Carr was traded with minor league pitcher Ty Narcisse from Florida to Milwaukee for minor league pitcher Juan Gonzalez. Neither Gonzalez or Narcisse would see action in the majors – Gonzalez had 14 appearances for the Brewers in 1994, but wouldn’t make it back to the bigs. According to Baseball Reference, the Brewers paid Carr $325,000 for his services in 1996 and 1997.  Of the trade, Carr said, “It’s cold up there, but I don’t expect this Carr to stall in cold weather.”

Carr slotted into the lineup in 1996 and was doing well (.274 average in 106 at bats) until a horrible injury derailed him.  He leapt and caught a fly ball on the warning track during a game in late May, but when he came down, he hyperextended his knee.  The MRI revealed a torn anterior cruciate ligament, requiring surgery.  Carr said, “When I come back I’ll be the same reckless car driver.  I’ll be back out there chasing down balls, making diving catches.  You haven’t seen the last of me yet.”

Carr missed the rest of the season recovering from the surgery and reported to spring training in 1997.  Brewers manager Phil Garner had high hopes for Carr that season, but they started off on rough footing.  Garner accused Carr of loafing during defensive drills, and this led to a heated argument.  Garner really needed a leadoff hitter, and wanted Carr in that spot – if he’d work on putting the ball in play more and working the count. But Carr kept on swinging for the fences as his batting average plummeted through April and May. Not only did Carr resemble Willie Mays Hayes in Major League II for his plate approach, he also loved to speak about himself in the third person. Other Brewers that referred to themselves in the third person were George “Boomer” Scott before Carr and Nyjer Morgan after him – but they generally backed up their talk with clutch hitting.

Chuck Finley was a tough opponent for the Brewers in 1997. He averaged 8.5 strikeouts per nine innings pitched, so it was important for the Brewers hitters to try to work the count against him. Carr led off against Finley in the eighth inning with the Brewers down, 4-1, and somehow managed to work Finley to a 2-0 count. He then ignored a “take” sign from third base coach Chris Bando and popped the next pitch weakly to third base for an out. After the game, before reporters were let in, Phil Garner was fuming. Garner caught Carr in front of his locker and asked what he was thinking in ignoring the “take” sign. Carr’s response, as most Brewers fans know, was classic:

It was Carr’s last at-bat for the Brewers, who released him on May 20th with a .130 batting average. Garner summed up the tussle by saying, “The guy is always talking about himself in the third person, which often gets you one of those white jackets that ties in the back.”  General manager Sal Bando also weighed in, saying, “Chuckie had become a distraction with his attitude.”

Carr finished the year with Houston and it proved to be his final season in the majors. The Astros wound up winning the National League Central division for the first time. In a strange twist, ten years later Carr found himself coaching in the Astros minor leagues. The Astros big league manager at the same time was…yup, you guessed it – one Phil Garner.

One of Carr’s baseball cards 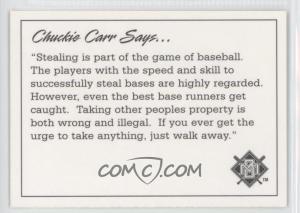 Phil “Scrap-Iron” Garner – would you dare defy this guy?

4 thoughts on “This Day in Milwaukee Brewers History – Chuckie Hacks on 2-0!”