When many of us think about Mother’s Day, we think of flowers or perhaps brunch with mom.  If she’s a baseball fan, we might even take mom out to the ballpark.  Hitting a major league home run for mom on Mother’s Day with a pink bat – well, that’s another level.  Yet ten years ago on Mother’s Day, 2006, that’s exactly the present Milwaukee Brewers infielder Bill Hall gave to his mom.  It was a special moment not just in franchise history, but also baseball history – and here’s why.

It was the first year of a new MLB breast cancer charitable and awareness program called “Going to Bat for Breast Cancer.” The NHL had done a pink hockey stick promotion that was successful in raising over $110,000 for charity.  This idea was passed on from the president of the Louisville Slugger bat factory to baseball commissioner Bud Selig.  The commish went for the new promotion and it was decided that pink bats would be produced for Mother’s Day.  Later these bats could be auctioned off to raise money for the Susan G. Komen for the Cure organization.   In future years players started wearing pink batting gloves and other items that also went to auction.

Not every player agreed to use a pink bat on Mother’s Day, such as future Brewer Mike Cameron. Some took it up for one plate appearance and switched back to their regular lumber after that.  A few players hit home runs that day including another future Brewer – Mark Kotsay.  But it was Bill Hall’s blast that was the most memorable.

Mother’s Day fell on May 14th that year and the Brewers were at home to play the New York Mets.  Doug Davis took the hill for the Crew against future Hall of Famer Pedro Martinez.  Davis had control issues to that point in the season that didn’t improve much during this particular game.  He issued five walks in a little over five innings, and took the lead in walks given up in the NL with 37.  On the other side, Martinez struck out ten batters over seven innings, which was his 107th time accomplishing that feat.  Yet he did have issues with the long ball, and gave up homers to Damian Miller and Rickie Weeks.  Martinez suddenly found himself leading the team with eight homers given up.  Neither starter figured in the decision – the game lasted 10 innings and both were long gone.

Hall’s mother Vergie was in the stands, having drove 10 hours from Nettleton, Mississippi, to see her son play. Hall started at shortstop as he was more of a utility player at that stage of his career.  Manager Ned Yost acknowledged that Hall should have his own set position, to which Hall said “I’m just in the lineup and that’s all that matters to me.”

The game was very back and forth with the Mets taking an early 2-0 lead in the second inning. Davis gave up two walks and then a double to former Brewer Jose Valentin.  The Brewers took a 3-2 lead in the bottom of the inning on Miller’s home run after Prince Fielder and Corey Koskie drew walks.  The homer from Weeks made the score 4-2 after five innings.  The Mets tied it up at 4 in the seventh inning on errors by Weeks and Geoff Jenkins.  In the bottom half Jenkins made up for the error with a sacrifice fly to drive in Gabe Gross.  Hall figured into the score as he put down a sacrifice bunt to move Gross from second to third base ahead of Jenkins at bat.

In the ninth inning Hall almost won the game with his defense. Xavier Nady came to the plate for the Mets with two outs and a runner on third.  Nady hit a ball in the hole toward Hall, who went onto the outfield grass and threw to first.  The ball came in on one bounce and Prince Fielder appeared to have it in his glove for an out, but the ball rolled away and the runner scored.  The game was tied 5-5 and the Brewers didn’t score in the bottom of the ninth, nor did the Mets score in the top of the tenth.  That set up another at bat for Hall after J.J. Hardy grounded out and Weeks was thrown out at second trying to stretch a single into a double.

Hall had little luck with the pink bat early on and struck out in his first three of four plate appearances. Still he kept taking it up to bat and later said it was because his mother never gave up on him, so he wasn’t about to give up on the bat because he was having a tough time.  When reliever Chad Bradford came in to pitch the bottom of the 10th, Hall had another shot with the bat.  After taking a change-up and fastball for balls, Hall guessed correctly that the sidearm Bradford would throw another fastball.  So Hall decided to hack on 2-0 and sent the pitch the other way over the right field fence.  The Brewers won 6-5 and took the series 2 games to 1.

After the game Hall said, “My mom was always there for me growing up, dropping me off at games and things like that. She’s the love of my life, so anything I can do special for her, I’m up for it.”

Hall gave his mom a spare pink bat before she returned home. The game winning bat was saved for the charity auction.  Brewers Principal Owner Mark Attanasio said he wanted to make the high bid and present the bat to who he thought was the rightful owner – Vergie Hall.  True to his word, Attanasio won the bat with a $25,535 bid and gave the bat to Vergie prior to the Brewers/Cubs game on July 7th.  The bat was a Louisville Slugger, Genuine C271L model.  Attanasio also gave the game’s lineup card in a frame to Bill Hall.

In 2007 the Brewers sold “Bill Hall Pink Bat Package” tickets to a game in June. The packages included an autographed pink bat from Bill Hall and entry to the “Club on the Club” area of Miller Park.  That year Hall again hit a home run with a pink bat on Mother’s Day, but accounted for the only run as the Brewers were blown out 9-1 by the Mets in New York.  Still, the 2006 pink bat home run will always be remembered as one of the great moments in Milwaukee Brewers history. 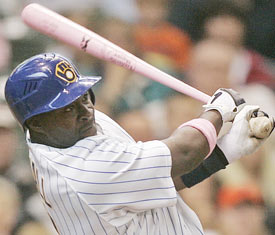 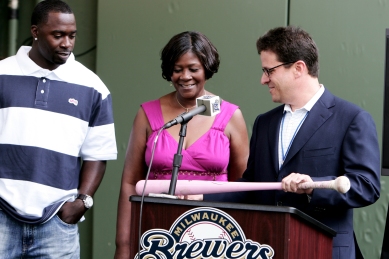