Attending baseball’s Opening Day means a lot of different things to fans. Depending on the stadium and team, as I like to say, your mileage may vary.  I’m a Milwaukee Brewers fan and attend games at fan-friendly Miller Park – which believe me was important this week with temperatures in the 30’s with blustery winds and occasional blasts of snow.

I dare say attending Opening Day is now a tradition for me as this was my tenth straight opener. Of course this may seem Little League to others – especially to the guy I hear interviewed on the radio every year.  He’s been to every Brewers home opener since 1970.  Talk about a streak!  So with a few of my own under my belt, in this post I’d like to take a look at some of the things that make Opening Day special – and how I got started going in the first place.

In 2006 I started thinking about taking my Dad to Opening Day.  It was one baseball “thing” that had eluded us since he started taking me to games at Milwaukee County Stadium.  Dad had a hard time landing Opening Day tickets during those pre-internet days, yet somehow he got us into the ’82 playoffs.  Go figure.  He had a couple opportunities to get us on the “Drunk Bus” as he called it, but after a night game incident that went awry, he never went that route.

I decided to purchase a 9 game ticket package for 2007 with the incentive that game 10 (Opening Day) was free. I also couldn’t argue with cheaper than face value tickets and Preferred Parking.  Excitement for the season was high for a number of reasons.  The current team had increased payroll by about $14 million in the offseason with some free agent re-signings (Bill Hall and Chris Capuano) and new free agent signings (Jeff Suppan, Tony Graffanino, and now-manager Craig Counsell).  It was a big retro year too as the Brewers celebrated the 25th anniversary of the 1982 AL Championship team, plus the 50th anniversary of the Braves victory in the World Series over the Yankees.

It was a beautiful day with temps in the 60’s. Dad and I grilled out (“Tailgated” in Wisconsin terms) before the game and then watched Ben Sheets throw a two-hitter against the Los Angeles Dodgers en route to a 7-1 victory.  No Brewers pitcher had thrown a complete game since 1979, so you can imagine the reaction when Sheets was allowed to bat in the 8th inning.  We all knew he’d be out to pitch the 9th and have a shot at finishing out what he started.  After giving up a homer in the second inning, Sheets retired the next 22 straight batters.  He had started a few openers to that point, but was already having injury issues – so this performance was a welcome sight.

One of my favorite quotes from Sheets about that game was in regards to manager Ned Yost letting him finish the game. Sheets said, “I had to put him in a figure-four (to let me go out for the 9th inning).”

That was the only home opener Dad went to as he started attending fewer games overall. Health issues over the following years made it more difficult for him to tolerate the long drive to and from Miller Park.  But I couldn’t have picked a better game and memory.  Since then I’ve attended every opener with a very good friend that I’ve known since childhood.  We’ve seen everything from a beating given to the Giants (13-4) to this week’s beating given by those same Giants (12-3); a dramatic 5-4 win over the Rockies to a 10-0 beat-down administered by the Rockies.  Win or lose in whatever fashion, we stay until the final out – and not just on Opening Day – but for every game.

To me, what makes the opener special besides sharing the game with friend or family is the start of a new season and all the possibilities for the team – and for me as a fan. Every team is different.  In 2007, fans knew the franchise was turning a corner into respectability (they finished 83-79 that year).  This year will be about rebuilding and watching what we hope to be future stars develop.  I enjoy seeing the complete roster being announced and the players lining the baselines on either side.  It’s a day of firsts – and firsts to me are really cool.  I don’t tailgate much these days, so instead I look forward to my first ballpark nachos, chicken tenders, and about ten other concession items!

Sometimes we’re in the thick of spring in Wisconsin – and sometimes we’re experiencing all four seasons on opening week. That opener in 2007 had great weather, but I do remember the temp plummeting the next day.  But no matter what the weather is in April, we know at some point the roof will be open and the sun will again shine.  I always feel like the sun is shining – win or lose, good weather or bad – and not just on Opening Day.  As Dad always said, “It sure beats working.” 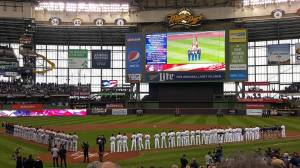