I answered an ad during senior year of high school that changed my life ever so briefly.   The owner/editor of the Verona Press was looking for feature article contributors, and I thought I’d take a chance that he would give a 18 year old kid a shot.  At $10 per story, what did he have to lose?  I interviewed with Henry Schroeder, who turned out to be a wonderful man and mentor.  He dubbed my work an internship of sorts, as I hoped to finish out my school year and summer contributing articles.  It wasn’t meant to be as my one and only article appears below.  I had a second article in the works about a local pet shop, but it was never published.  Sadly, I believe my notes for that story have been lost to many moves over the years.

I was just coming off a hernia surgery when I wrote this article and I recall my dad having to drive me to conduct the interview.   While I was overwhelmed when the article appeared in the paper a couple weeks later, I think I realized I had bitten off more than I could chew.  I moved on to the next article about the pet store, but I dragged my feet due to school work and other commitments.

I learned a lot from Henry Schroeder and valued our conversations during my brief time on the VP staff.  Henry passed away in 2013, a highly regarded member of the community, active in several groups and a former president of the Wisconsin Newspaper Association.

Here is my article, typed up as it was originally published.  I could not find an online version in the Verona Press archives.

Every small town seems to need a meeting place, be it a café or a simple corner tavern, and Mount Vernon’s main gathering spot is the Citgo gas station.

The building that houses the business was built nearly 8o years ago by an area resident, Edwin Zahler.  The men who operated the garage originally were brothers, Beford and George Lee.  They both lived just outside of Mount Vernon.

A handful of men owned the business until 1956, when one of today’s owners, Harland Erfurth took over.  He was a blacksmith in Mount Vernon before deciding to make his living from working on automobiles and selling gas.  His partner, Gerald Trainor, joined him in 1970 after driving a dairy semi and a Verona Redi-Mix truck.  Today Erfurth owns the tools and equipment for fixing cars, along with the building itself.  He also owns half of the inventory with Trainor, which includes fan belts, windshield wipers, and candy.

The pop and candy are priced in such a way that the pair only break even moneywise.  Many of Mount Vernon’s youngsters take advantage of the low prices, and everyone involved with running the station appears to live for the small smiling faces eating goodies.  Even adults stop in to drink a ten cent bottle of pop and talk about everything from sports to news to weather.

But the main source of income at Erfurth-Trainor Citgo is probably comes from Jerry’s Bulk, which is the gas truck operated from the garage.  The name of “Jerry’s Bulk” came from Erfurth’s late father Jerry, who owned and operated the truck first.

Erfurth himself drove the truck for many years before Trainor’s son Gary began working at the station.  He now drive Jerry’s Bulk and makes trips to Francis Citgo in Belleville at least once a day to obtain fuel for customers.

Erfurth-Trainor Citgo is definitely a family project on both halves of ownership.  Trainor’s wife Geraldine just happens to be Erfurth’s sister, and the marriage makes the owners in-laws.  Also, Trainor’s other son Guy has helped out in the business off and on in the past.  Both Erfurth’s and Trainor’s wives are actively involved with the garage by doing bookwork and tying up various loose ends that need attention to keep a small business growing.

As in any business, there are many likes and dislikes, and Erfurth and Trainor obviously have their share of good and bad times.  Trainor didn’t care to express his likes of garage work, but as any Mount Vernon resident will maintain, he seems to light up when any young child comes in to munch on goodies.  He even dressed up as Santa Claus several years ago to entertain the children at LaFollette Heights grade school around Christmas time.

Erfurth also likes the customers that he has to deal with in his job.  He says he loves to meet people and get to know them.  Erfurth couldn’t really find anything to dislike in garage work because… “Once you’ve been working for a certain amount of time you learn to handle the ups and downs. A farmer might not like getting up to milk the cows, but he still does because it’s what he likes to do for a living.”

The living made by Erfurth and Trainor comes from a little white building located on 1688 Washington Street in Mount Vernon, an unincorporated town  that probably could be missed if one blinked his or her eyes when driving through town.  The location doesn’t matter that much to the pair of owners, but the work they do within the garage is what holds their desire to help people.  They are one of a tiny number of garages left that actually does any welding, something that even professional garage workers try to stay away from.

Inside the Mount Vernon garage there are mainly two rooms:  the part where the cars are worked on and where Jerry’s Bulk is parked at night, and the little room that holds the snack food and the cash register.  It is in the latter half that townspeople gather to communicate ideas to one another.  Everyone appears to like the quiet atmosphere that isn’t touched by a hurry-up-and-compete feeling that is part of so many businesses today.

As for the future, no one really knows what direction the garage will take.  Neither Trainor or Erfurth would say what they would like to accomplish in the next few years.  They are both content to take a week off a year to vacation, and try to miss as few days as possible because of sickness.  The two owners have stayed together for almost seventeen years now, and have become a part of Mount Vernon, as well as a part of the town’s history. 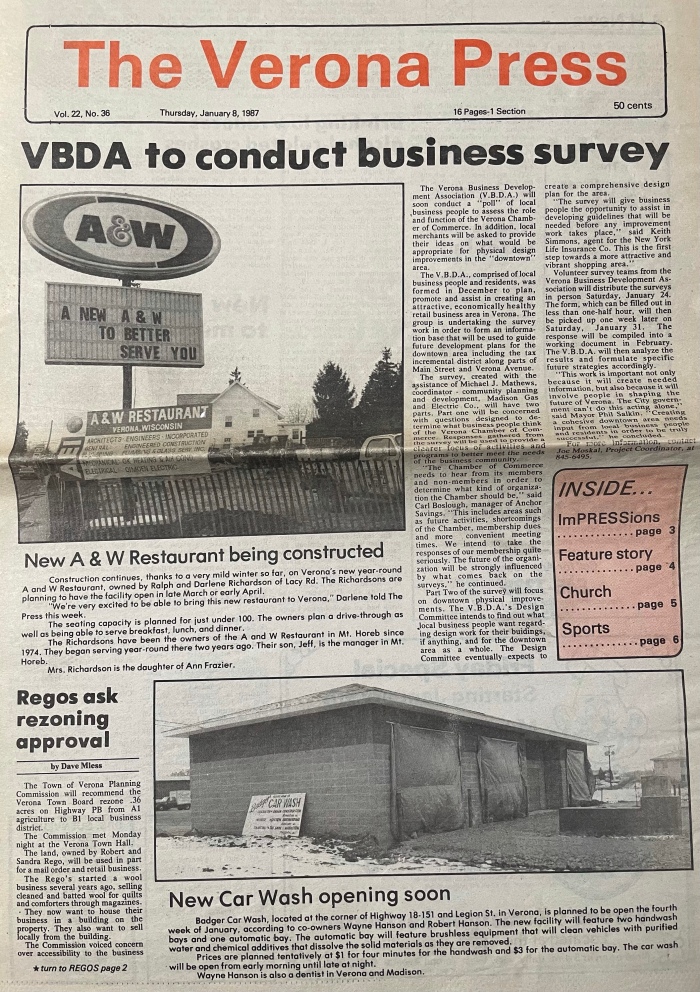 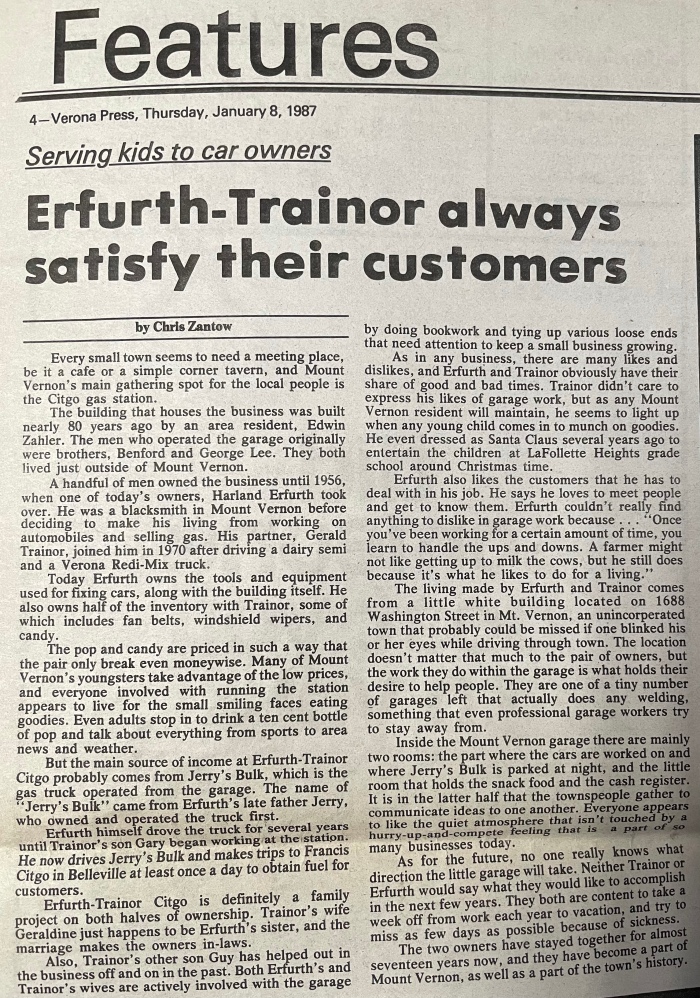 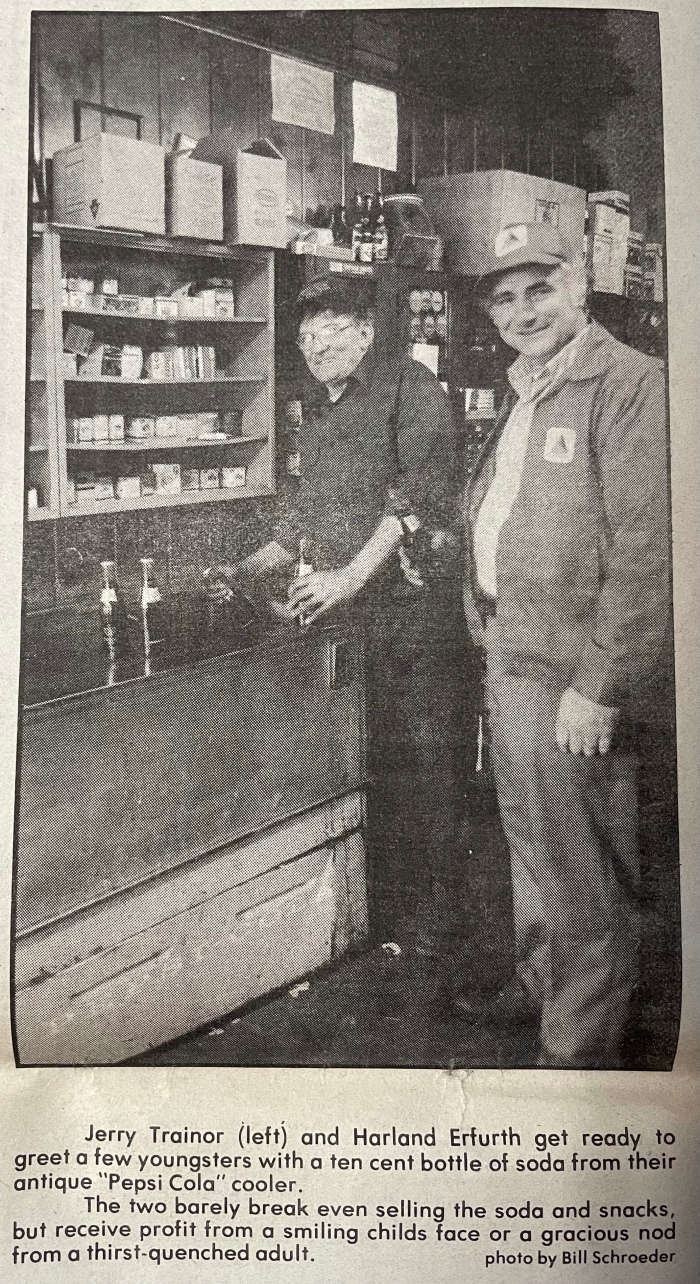 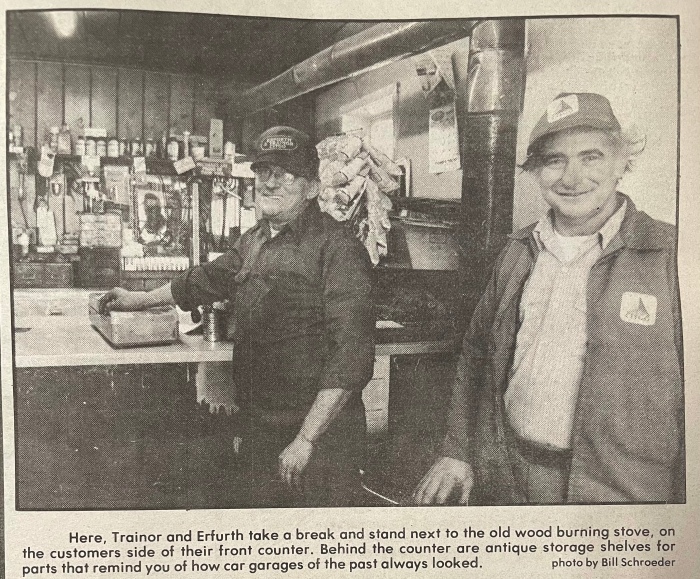