Here’s another trip into the archives…an editorial from my “underground” high school newspaper, What The Feck?

Long ago, the glue that held humanity together was the spirit of giving on holidays.  Today, however, many people feel that throwing money around shows affection for their fellow man.  This whole scheme of wasting countless dollars has many contributing factors that will be uncovered within this editorial.

The first major problem with holidays would be those ridiculous television specials centered around a holiday theme.  After all, no one with a fair amount of sanity would sit through “The Grinch That Stole Christmas” or “Charlie Brown’s Thanksgiving” for ten years in a row.  It’s also doubtful that anyone would care to see He-Man hack and slash his way through Mother’s Day.  Holiday cheer is presented on television for two basic reasons:  To score in the network ratings race and to sell sponsors commercial spots.

Another gripe of television deals with the various performers who appear between programs to blab about holiday spirit and what those special days mean to them.  Usually as an attention-getter for their TV show, they wish the viewers “good tidings” as well.  If they are that sincere, why don’t they send my family a greeting card?

This brings us to the tacky ways that businesses advertise their holiday products.  Now even Arbor Day and Halloween accessories go on sale months ahead of time.  Joe Blow always seens to pop out of nowhere selling unplucked turkeys for everyone’s holiday feast.

Even so, Christmas is still the reigning king of holiday commercialism by far.  Each year, businesses attempt to sell the most garbage by hitting the public with an advertising blitz in late October.  Shopko’s ad campaign is incredibly stupid:  “The Right Place For Christmas.”  What do they mean?  Is Shopko the right place to buy gifts, or the right place to spend Christmas?  It’s all very puzzling for the average consumer.

What about “Crazy TV” Lenny pretending to be an elf or a pilgrim to sell merchandise?  He may be stooping very low, but he must have a lot of guts to be able to claim residence in the North Pole and not Madison.  Oh well, all in the spirit of making more and more money!!!

Ever notice how it is impossible to shop anywhere during the Christmas season?  To solve this pressing problem, simply visit your friendly merchants on the night of Halloween.  Last year, for instance, there were twenty people in West Towne on Halloween (not counting salespeople).  Half of those were from the Mt. Horeb area.  Everyone else was up on State Street celebrating for no reason whatsoever.

So how do we destroy the spread of holiday commercialism?  We must first bring back true spirit and meaning into every holiday (including Columbus Day, of course).  Secondly, we must kill the businessman’s powerful desire for money.  This would be quite unrealistic because of the way our economic structure is built.  Take away competition between companies and our monetary would crumble.  Still, taking away their greed is a nice thought.

Maybe someday everyone would close their eyes to the flashy lights and false ways to show affection surrounding the holidays.  Celebrating those special occasions will have a real meaning once again.  For some, that meaning or reason still remains even through today’s commercialized world.  To traditionalists, it’s not the holidays that are bad, but the way they are celebrated is what’s rotten.

***If this is your first exposure to “WTF,” check the archives for a post last week that gave a detailed explanation of the newspaper. 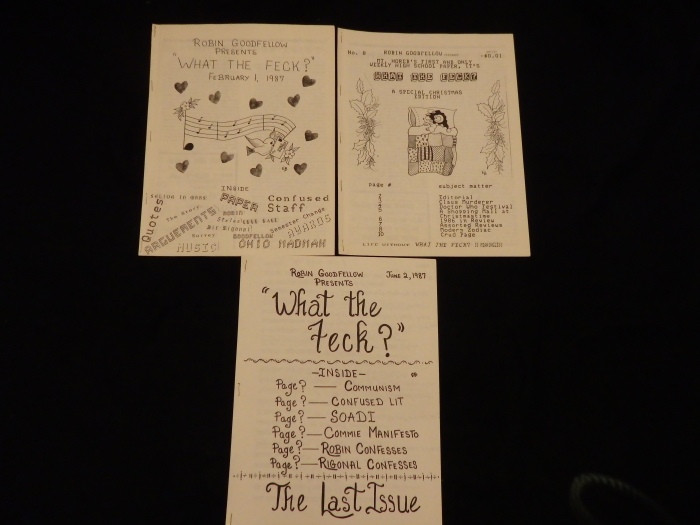 The Christmas issue was considered a “big issue.”  This meant it was an 8.5 x 11 layout.  Other issues were half the size.

2 thoughts on ““What the Feck?” Editorial – Commercialism Plagues Holidays”